Semantic Collaborative Corpora Analysis (Semantic CorA) is a lightweight virtual research environment (vre) providing a modular plattform of tools for collaborative analysis of bigger amounts of data. Semantic CorA builds upon the open-source software MediaWiki - which empowers Wikipedia – and its extension Semantic MediaWiki (SMW). Tools are offered to integrate, enrich, store, query and visualize research data, which can be published in the Semantic Web and shared with other researchers.

Semantic CorA is motivated by the lack of virtual research environment in the in the (digital) social sciences and humanities, that offer capacities for adjustment to relevant needs with low technical barriers. It was exemplarily developed for research in the history of education and can be adapted for the future use by other disciplines.

The design of Semantic CorA is based on a participatory and agile approach following concrete research practices and addressing added values. While general technological extensions for SMW are developed, the design and innovation process is driven by scholarly research projects, that invoke concrete capacities for interaction in research practice (see: In Practice). Semantic CorA is iteratively developed and directed towards research practice – including agile computing, stepwise open-source publication and participative design. Researchers themselves are engaged in its design and encouraged to actively participate. 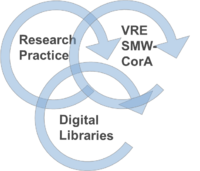 Interrelation between communities at the design of Semantic CorA

Semantic CorA focuses on the social sciences and humanities and establishes VREs in the research community of historical research in education. Collaborative work should be possible in the maintenance and analysis of research data while special attention is paid to the re-use of research data at the beginning and the end of the research processes. Semantic CorA therefore relies on Semantic MediaWiki, which ensures a certain degree of interoperability of newly data due to RDF export features (and other export formats like csv, json,..).

Semantic CorA aims at connecting three different communities which are:

Semantic Media Wiki was chosen as a platform because it is a lightweight system with a broad community of developers and users. As its development is open source, the outcomes from our project can easily be reused and adapted by others. As Semantic CorA does not aim at developing a (technically) new vre, and the basic modular system architecture of MediaWiki (i.e. Semantic MediaWiki) can be adapted to needs. Semantic CorA targets at the management and analysis of large corpora but clearly does not claim to be a large scale solution for the totality of research fields in the humanities and social sciences. The RDF support of Semantic MediaWiki with its interoperability is a fundamental criterion which ensures reuse of new data in other rdf-based systems. This interoperability at the data level allows for thinking at a smaller scale and more networked environment in the context of vres.

Wikis are well-known as a tool for collaborative work in the web. Even given some critical usabilty issues e.g. regarding the syntax, the use of wiki-based systems draws on fundamental user experiences. Although editing in the wiki-based system is less trivial for techical laypersons than often assumed, they are generally familar with the concept. A positive effect of Semantic CorA was that after a while the users were able to construct own queries and templates to gain more information from and interact more flexibly with their data. This development is clearly due to the openness of the wiki system which is highly adjustable compared to other large VREs.